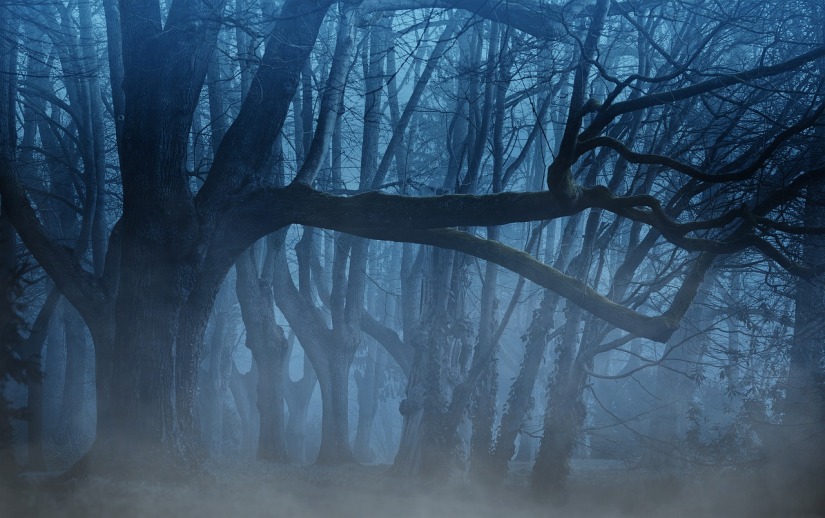 It’s 7:07 pm. Winter is beginning to melt under the heat of a forceful spring sun; but by 7:07, it’s still quite dark. Lucia is in the kitchen, numbing herself with boring tasks. Organizing cupboards. Spraying the countertops with vinegar and lemon oil to wipe them clean. It’s a quiet night. The only sound in her house is the low pitch of her humming, and the almost inaudible breath of her dog. If the window was open, she might also hear the subtle symphony of the forest; a rabbit’s quick steps or the crunching of branches under the weight of a lone wolf. Occasionally, the rustling of trees disturbed by bears, awakening from seasonal slumbers. Lucia likes living in the forest. It’s easy. There are rules, of course, but it’s a small price to pay. Things are always the same.

Things will be different tonight.

At 7:42, Lucia rinses out the rag she’s used to clean the countertops, rings it dry, and hangs it on its hook. Her hair, tossed messily atop her head, has come loose. She fixes it in the hallway, using the image of herself reflected in an antique mirror she took from grandmother’s estate. Perro, the dog she found but never bothered to name, yawns a pathetic growl. It’s almost time for dinner. She looks down at him and smiles, blind to the shadow that has swept by her window.

An old clock that she believes is just a little slow bongs the sound of 8 pm. Back in the kitchen, Lucia fills Perro’s bowl and calls out to him. While he munches loudly, she turns off the generator. She does this every night, to preserve energy. Carrying a lantern, she returns to the main part of the house to light the fire. This is the first time she notices something is wrong. Her logs are gone. Every last one. The fireplace is empty, save for last night’s ashes. Cutting her eyes curiously, Lucia slowly twirls around. Perro’s munching echoes to her. There is no other sound.

At the realization that she will have to go out for more wood, a chill crawls up Lucia’s spine. It’s 8:13. She does not leave the house after 8:00. It’s thirteen minutes too late.

Panic tugs at the hairs on the back of her neck and up her arms. Her gut twists with displeasure. The forest is a fine place to live, as long as you follow the rules. Tonight, she will have to break one.

Lucia begins by opening a window; inviting the fresh night’s air in — becoming acquainted with it. Perro moves to her side, unnerved by her transgression. He looks up at her but she refuses to meet his eyes. She’s about to break a rule. Shivering, Lucia tugs her oversized sweater around her body, until the swaddle feels sufficient. She swings the front door open and fits Perro with his leash. It’s attached to the porch and gives him little leeway. It will reach the log pile. They step out in unison but as they do a white light crashes through the sky. Perro squeals and steps behind Lucia. Her heart amplifies, pulsing in her ears. The ephemeral light was only enough to reveal a figure straight ahead. Too small to be a bear. Too upright to be a wolf. Lucia raises her lantern, though it does no good, providing only a few feet of dull, orange glow.

Lucia opens her mouth to call out to the figure in the dark, but a loud gust of wind cuts her short. It blows with enough fury to push her back into the house. She closes the door. The world falls silent once more.

She broke a rule.

A fist pounds against the door. Once. Twice. Three times.

Lucia shakes her head, eyes wide in disbelief. A small part of her believed she had made up the rules. That they were arbitrary. They aren’t. She stumbles backwards, as if she can walk back in time. She can’t. It’s too late.

11 thoughts on “Flash Fiction – And Then It Came”