Hi all! Ever since I saw Pizza Pizza advertising their new cauliflower pizza dough, I’ve been really curious about it… but not curious enough to potentially ruin the rare and coveted order-in pizza night. But when I came across a YouTube tutorial that made it look so simple AND so delicious, I had to try it right away!

7 Low-Carb Veggie Dinners (pizza dough featured at about the 1:40 mark)

Overall, this recipe was really easy to follow along with, but I definitely hit a couple bumps in the road.

First, I had a difficult time getting my cauliflower to a fine grind, which meant it didn’t stick together well enough to form a nice ball.

Next, squeezing the water out of the piping hot cauliflower was very unpleasant! It really burned and stung, but I wasn’t sure if letting it cool first would mess with the consistency, so I powered through.

Once I mixed in the seasoning and egg, it was really easy to form the flat dough shape on my pizza pan. I laid down wax paper first, since that’s what it looks like is being done in the video. This was a BIG mistake.

Within a couple minutes my kitchen started to smell like… well… burning wax. I opened the oven to check on the dough and it looked fine, but there was a smoke invasion.I had to take the batteries out of my smoke detector and open windows.

But, when it was done, it looked and smelled great! I added my homemade sauce, chopped veggies, and cheese. After another 8 mins the burning wax smell was even worse, but the pizza looked pretty enticing!

I let it cool and then set about the slicing and serving… That’s when I found out that the wax paper was an even bigger problem than I had thought. 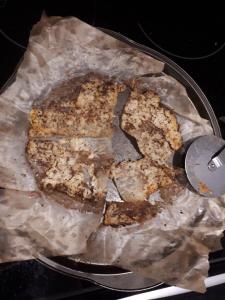 The bottom layer of “dough” was sacrificed 😦

Burnt hand and wax paper disaster aside, this dish was really tasty! The texture of the dough was kind of crumbly though, so it couldn’t be picked up and eaten like a slice of pizza. We used forks and complained very little.

What I’ll Do Differently Next Time

Next time, I’ll skip the wax paper altogether and spray my pan with olive oil. Because of the crumbly texture, I think I’d even skip the “pizza” part and make it more of a casserole number. I think it would work really well to spread the cauliflower mixture at the bottom of a baking dish and layer the sauce and toppings like you might a lasagna.

All said, not bad! I’m glad I went on this little cooking adventure 🙂

Have any novel cauliflower recipe stories to share? Let me know in the comments!