Little Star by John Ajvide Lindqvist was first published in 2010. It holds a 3.63 on Goodreads. 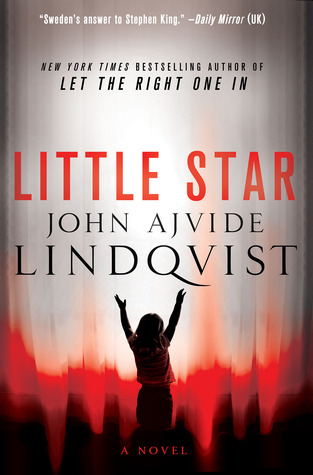 A man finds a baby in the woods, left for dead. He brings the baby home, and he and his wife raise the girl in their basement. When a shocking and catastrophic incident occurs, the couple’s son Jerry whisks the girl away to Stockholm to start a new life. There, he enters her in a nationwide singing competition. Another young girl who’s never fit in sees the performance on TV, and a spark is struck that will ignite the most terrifying duo in modern fiction.

I am eerily captivated by John Ajvide Lindqvist’s books. That said, I can only read one every couple of years or so, because by the end of each I need a good, long break from the utter darkness. This book is no exception. In fact, it’s the darkest one I’ve experienced yet. After finishing it, I was notably shaken up for the rest of my evening. This was in part because the book was so dark and so graphic, and because the style made for an especially visceral experience.

The first thing to note about this book is that, like many of Lindqvist’s works (Let the Right One In, is a great example), it is a story that is very much about being a child while being not at all for children. This particular form of nostalgia is a bit surreal in that the children who occupy his stories are put against the very stark contrast of a cruel and unforgiving world. As an adult, the reader sees this in a way that is so clear, it’s uncomfortable.

That’s exactly the case in this book; only our main characters also have the capacity to also see the world for what it is. Their response is so unexpected, it sent chills up my spine. For them, it’s simple: The world wants to eat you up, don’t be afraid to it eat first. Teen angst quickly turns to a sort of numb depression. The emptiness, as it turns out, can only be filled by one thing – taking life.

The book deals with everything from body image issues to mental health issues and depression, cyberbullying, and sexual assault. Most prominent, though, is the violence. There’s so much of it. It’s graphic, it’s surreal and the experience of it is heightened not only by the ironic image of young female perpetrators but by the accompanying “music.”

Narrative Structure and the Use of Music

The narrative structure is slightly atypical. It jumps viewpoints often and also moves through time very quickly. First we meet the couple who find and take in a baby girl they call Little One (later called Theres by their son). We follow the first ten years of her life over about a quarter of the book. For the next quarter, we follow the first ten years or so of Teresa’s life. About halfway through the book, the girls meet and form a terrifying duo that is reminiscent, at times, of the 1994 movie, Fun.

Lindqvist is also a big music fan and it comes across in all of his books. In his drama/horror Harbour, he features two characters that speak to each other almost exclusively in The Smiths lyrics. So when I saw how heavily music was featured in Little Star, I decided to experience the book the way he probably intended. That is to say, when the lyrics of a song were woven into the fabric of the text, I played the song. In the final scenes, this left me in such a state that I may never listen to ABBA again. That juxtaposition was a thing of nightmares.

I’m not sure how I feel about this. I’m always of two minds when it comes to the portrayal of mental health issues – representation is important, but is this representation fair and accurate? The truth is, I don’t know. The girls are obviously both unstable. With Theres, it’s framed as something almost supernatural (or divine). With Teresa, it’s framed as something that requires medical intervention. At one point she is held in a facility and put on medication, though we are never told her diagnosis. Keeping it vague feels true to the character’s POV (it’s believable that she pays the words no mind), but it also frees the author from adhering to any strict rules regarding her experience of whatever it is. It feels like a cheat in that way, and I can’t help but wonder how I’d feel about the portrayal if I was given more information.

My favourite Lindqvist book is still Let the Right One In. For all its darkness and the violence surrounding the two characters, there is something inherently sweet about their story. That’s what I love about it. This book does similar things but because both characters are themselves perpetrators of indiscriminate violence, it’s hard to appreciate the sweet moments between them. It is, however, really fascinating in terms of character study and narrative structure. If those things interest you, and you can stomach brutality, I recommend this read.

The truth is, even if you don’t like what the book does, it does do it well. And, it leaves a lasting impression.