This year, I did a month-long series pairing up spooky treats with my favourite Halloween season books. For the week leading up to Christmas, I decided to pair 7 books with 7 Christmas Cookies (recipes included). The books aren’t all holiday-themed, but they are all books I consider great December reads, for one reason or another 🙂 Let the countdown begin!

Day 1 – Eliza and Her Monsters by Francesca Zappia 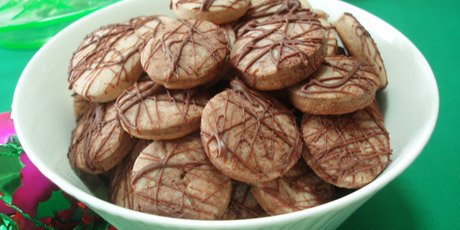 Have you ever been so driven to create art that you worked through Christmas morning, without realizing it was Christmas morning? Eliza has. Her insanely popular webcomic is the most important thing in the world to her, and her favourite thing about it is that no one knows it’s hers. She has created a world, and gets to live in it, completely anonymously — something that’s a little harder to do in the real world, where the kids at her high school know her as Creepy Eliza. So, when she’s asked to show around the new kid at school, a rough-and-tumble-looking football player sized boy, she’s wants nothing to do with him. But they have one big thing in common — Turns out, her webcomic is the only thing keeping them both afloat in a sea of anxiety, depression and trauma.

Recipe: Cinnamon Chocolate Cookies, because we tend to think about cinnamon and chocolate as a bit of an oddball pairing, just like Eliza and Wallace. Or, for that matter, Wallace and his fandom!

Check back tomorrow for another Holiday Pairing!