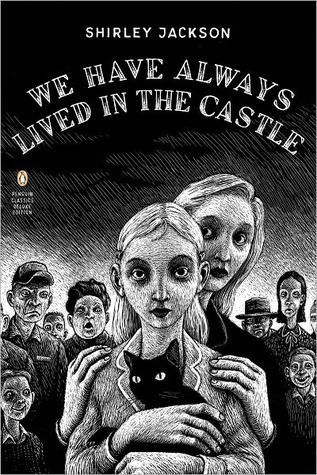 Shirley Jackson’s We Have Always Lived in the Castle was first published in 1962. It’s a gothic horror classic that deals with issues of mental illness, agoraphobia, and social isolation. It currently holds a 4.02 on Goodreads.

Mary Katherine “Merricat” Blackwood and her elder sister Constance live alone in their ancestral home with their crippled uncle after the tragic murder of both of their parents, their aunt, and their younger brother. Having been accused and later acquitted of the murders, Constance confines herself to the grounds of their home, while Merricat contends with their hostile neighbours and with the ever-increasing sense of impending danger she feels is heading their way.

From My Reading Challenge:

After binge-watching The Haunting of Hill House this Halloween season, I was really determined to read some Shirley Jackson. I bought that book, but decided to let the TV show fade from my memory a bit before reading it. Then, We Have Always Lived in the Castle was mentioned on the podcast Reading Glasses, and since it’s so short, I thought it sounded like a really good way to ease in. I was captivated from page one. I found the tone to be both creepy and compelling. The style of writing reminded me of The Yellow Wallpaper, The Bell Jar and Alias Grace; all of which offer the voice of a woman who is troubled, withdrawn or ostracized. In We Halve Always…, something is not quite right with Merricat, but because we are only in her point of view, it takes a while to figure out exactly what it is. When it’s revealed… shivers.

I really liked the way the story developed. I liked that it took a long time to find out what exactly what was going on with Merricat. We learn right away that she is part of a small family of recluses, that the townsfolk really despise them, and that things have been this way since a certain event took place. The event that is being referred to is slowly unveiled, and although you can find a lot of puzzle pieces throughout, you can’t put them all neatly together until the end. I thought the mystery of it all was spellbinding, but I was also intrigued by the way Merricat’s mind worked.

She’s deeply troubled, and much of her thoughts are preoccupied with imagining cruel punishments for the people who are cruel to her. No doubt, mental illness can be a difficult thing to portray, but I never felt this take on it was cringe-worthy. It felt raw and non-judgemental, but dark. It also gave the atmosphere a lot of tension. At times, interactions between characters (and even the story itself) seemed unreasonably hyperbolic, but I’m inclined to believe that is partly because everything that is happening is being filtered through Merricat, who does indeed see the world in very dramatic hues. She is an unreliable protagonist, and yet, I never felt lied to. I felt like I was made to see the world through the eyes of a young woman living with mental illness that comes out in very specific ways. It was a really interesting read.

Their tongues will burn, I thought, as though they had eaten fire. Their throats will burn when the words come out and in their bellies they will feel a torment hotter than a thousand fires.

I would recommend this book for: Fans of gothic literature and suspense. Particularly, if you enjoy dark stories like The Yellow Wallpaper, The Bell Jar and Alias Grace, this might be for you. It would also be excellent required reading for a Gender and Horror course!

I would not recommend this book for: People who like action-driven stories. To be honest, not a lot happens in the book; it’s a slow burn.

I have implemented a standard rating system to my book reviews:

1 – Story, plot and character development are all poor

3 – Story, plot and/or character are interesting but some aspects of the book are problematic and/or not fully developed

5 – Strong story, plot and character development along with thoughtful commentary

I give this book a 4. I thought the story was a little out there, but the plot and character development were entrancing. I loved it. I felt like it dug into the dark side of mental illness, without exactly demonizing it — even in a horror story. That said, it didn’t really offer hope for people living with Merricat’s issues, which might be considered a shortcoming of the book.