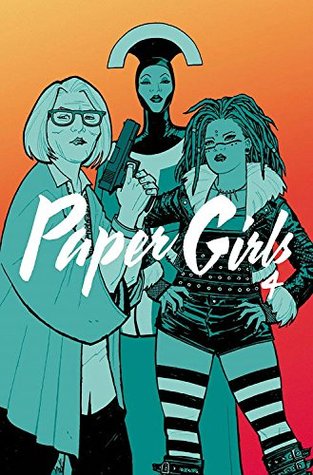 The mind-bending, time-warping adventure from BRIAN K. VAUGHAN and CLIFF CHIANG continues, as intrepid newspaper deliverer Tiffany is launched from the prehistoric past into the year 2000! In this harrowing version of our past, Y2K was even more of a cataclysm than experts feared, and the only person who can save the future is a 12-year-old girl from 1988.

The Series So Far

I’m starting this at volume 4, so like I did for Saga, I’ll catch you up on why I’m into this series.

Reason #1: It’s written by Brian K. Vaughan. I’m a huge fan and have yet to encounter any work by him I don’t immediately love.

Reason #2: 80s nostalgia. I especially love that we have this 80s adventure sci-fi set up around four awesome girls, rather than the typical band of boys.

The series is one of time travel, but it kicks off in 1988, the year I was born, and follows a group of girls who encounter something strange in the very early AM, on their paper delivery route. What is it? A flash, a group of weird monster-ish guys and… an iDevice of some kind. 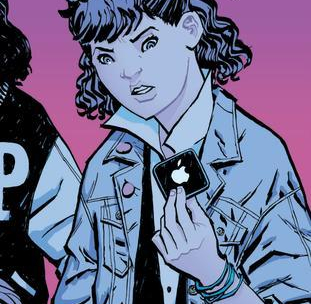 Reason #3: Coming-of-age storylines. Vaughan never shies away from dealing with big issues in his work, and this series is no exception. A group of badass girls, whizzing through time, trying to survive and take care of each other, and learning a lot about themselves along the way. Themes include:

My Review of Volume 4

Volume 4 picks up just after most of the girls have been launched through time, again. This time, they land back in their hometown. Only, it’s new year’s eve, 1999. Y2K is in full swing, and the robotic future monsters roaming the street are the proof – something is not right.

I love that this volume was interspersed with real newspaper headlines form the Y2K period. They include a Time magazine cover, warning stickers from Best Buy (Turn off your computer by midnight), and even a recent Bloomberg Politics headline about Trump ordering the government to stop work on the Y2K bug! This was really well done, and did a great job of reminding me how much chaos and fear there was in the ’99 atmosphere.

We also learned more about Tiffany, and her future! As kids, we all wonder at some point or another who we might end up marrying – imagine meeting the person and being utterly shocked by who he is! Oh, time-travel… so much bizarre fun. We also learn that Tiffany may have special abilities that the other girls do not. And it absolutely comes in handy. It was great to see her step up and be in charge.

We also deal a little more with Mac’s homophobia, and KJ’s sexuality. It would have been nice to dig in a bit deeper here, but I have a feeling this will be an ongoing theme that will develop pretty slowly.

As for world-building, there is some development about WHY time travel exists and what’s happening. The Battle of the Ages is explained – the ages old debate of whether it’s better to fix history, or leave it be. Two sides, one war; and the girls are caught in the middle.

I really enjoyed the Y2K throwback, and I think the direction the story is taking with time travel and the sort of existentialist values behind it is exactly where I want it to go. I give this volume a 4/5, because it’s time for Mac and KJ to have a heart-to-heart and I’m bummed we didn’t get one yet.