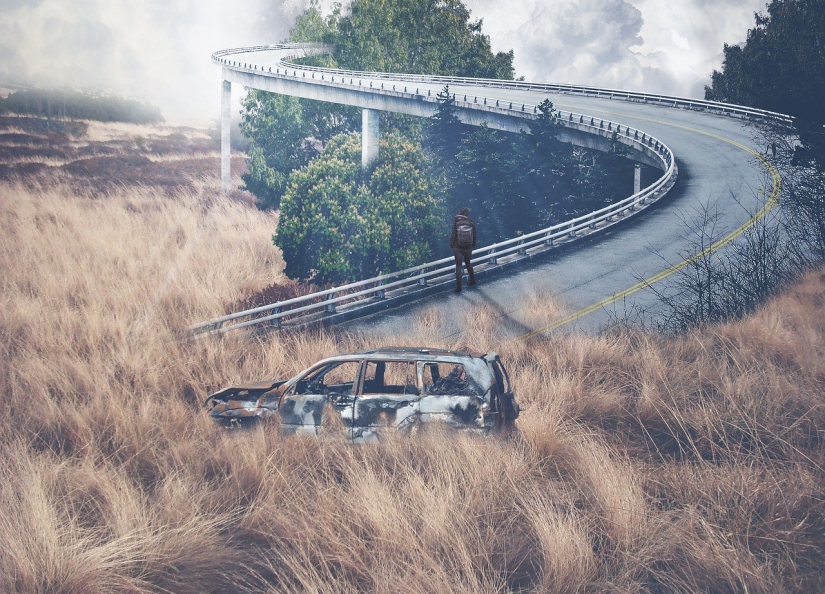 Three matches. A can of tuna. Two cans of lima beans. Some peanuts. Half a tube of antibiotic cream. Four bottles of water.

I’m rifling through my shrinking sac of supplies, listening to the fire pop and crackle behind me. Then I hear it. A crackle, sure, but not of the ember variety… someone is behind me. I freeze, heart crawling up to my throat. The footsteps are too deliberate to be a Dead, but the Living aren’t always safe to encounter these days either. Slowly, I reach for the knife in my boot, and slide it out carefully. The footsteps get closer, but I keep waiting. When I swing around, I want whoever is behind me to be close enough that they’ve already let their guard down.

I spin on my heels, stand up straight, blade out. His hands shoot up in the air, the way people used to surrender to cops back when we had cops.

He takes half a step back, but he’s still so close I can feel his breath. I miscalculated. There’s so little distance between us, it’s a wonder I didn’t stick him. That he didn’t stick me. Then it hits me. He’s not holding a weapon. I lean in.

“What are you doing?”

“Nothing. I mean — I — I haven’t seen anyone in a while. I thought — I thought maybe I was imagining you.”

His voice drops, self-consciously. He’s still sorting through it, wondering if I’m real. I am. And so is his breath. It’s…

“You smell like chocolate,” I blurt accusingly, my eyes fixed on him.

As if I’ve said something relieving to him, he exhales, lightens and smiles. “Thank you.”

I cock my head, wondering if this guy’s for real.

“I’m not flirting with you,” I clarify. “I’m asking you where the goddamn chocolate is.”

His fear and discomfort returns. His hands scramble to his pockets and I raise my weapon with more intent.

Finally, he pulls out a half eaten, chocolaty power bar. I snatch it, weapon still in hand but no longer trained on him. I can’t remember the last time I smelled that smell. I stare at it blankly, in disbelief, before sinking my teeth in. The texture is an unpleasant mix of granular and chewy, but I don’t care. It’s chocolate.

The stranger backs up a few more steps and let’s his shoulders drop. The smile returns.

I want to snip at his sarcastic teasing but I can’t find it in me to care. I’m eating chocolate.